I’ve been looking at dash cams recently, and wanted to see just how affordable it could be to fit one to a vehicle. Honest John recommended the Lanka HD camera, which at £21.99 from Amazon was well within my budget for this project. 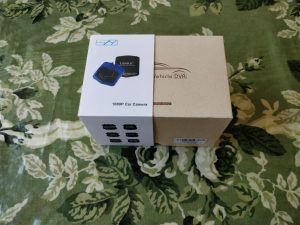 The camera arrived in a good quality box, containing a suction cup mount, a cigarette lighter 12V to mini-USB adapter, and a USB type A to mini-USB cable.

The camera has plastic protection over the lens and its LCD display, which should be removed after installation.

On receiving external power, the camera switches on and immediately begins recording video to a micro-SD card (not provided, up to 32 GB supported) in 3 to 10-minute clips, overwriting the oldest clip first once the card is full. An accelerometer in the camera (advertised as “G-shock sensor” detects shocks, such as sharp braking or a collision and will automatically ‘lock’ a video clip so that it is not overwritten. One can also press the warning triangle button (⚠) on the right of the camera front to achieve the same effect.

When external power is removed, the camera switches over to its modest internal battery, taking a few seconds to save the current recording and shut down.

Thanks to its internal battery, the camera can also operate in ‘parking mode’. In this mode, the camera ‘sleeps’, and when awoken by the accelerometer detecting a large enough shock (such as someone bumping into your parked car) will switch on fully, record for twenty seconds, and then switch off. At the most sensitive setting, ‘2G’, shutting the door or the bonnet did not trigger the camera – jogging down stairs whilst holding the camera did, though.

The unit has an LED lamp which can be switched on from the menu, though I wouldn’t recommend this as all you will see is the reflection in the glass of the windscreen. There is a microphone, which is on by default, but can be toggled on and off by pressing the ‘up’ button (while recording or not) – this setting is persistent between power cycles.

A handy feature is hidden in settings as ‘Screen Saver’ – it allows you to have the camera switch off its display after a minimum three minutes’ inactivity, and is essential for night time driving to avoid it becoming a distraction.

I have a VW Polo Mark 4 (9N), which gives continuous power to the 12V cigarette lighter socket – meaning the automatic switching mode of the dash cam would not work for me. My solution was to buy a dash cam hardwiring kit (a 12-24V to 5V mini-USB adapter) along with a fuse tap (‘add a fuse’) – £11.99 total from Amazon.

The fuse tap is put in place of a fuse in the fusebox, with the existing fuse inserted into the lower socket on the tap, and a new fuse in the upper socket, which protects the accessory to be connected to the tap. Note that you will need a tool with which to crimp the connection between the fuse tap and the 12V-to-5V converter unit.

To obtain the desired operation, the fuse we replace needs to be one which is only live when the ignition is switched on. I chose the fuse for the rear window wiper (the top left fuse, marked ’10’ in the image below).

The fuse tap is fitted as below.

Note the ground wire, which is connected to a screw immediately above the fuse tap. A T25 Torx bit is needed to loosen this screw. Generally, all metal on the chassis is grounded, so any suitable point will do. I used a multimeter between the centre (12V) of the cigarette lighter socket and the screw to check it was suitable – the meter should show the full battery voltage.

For the fuse tap method to be safe, the current draw of the 12V-to-5V adapter under the maximum load (camera and its screen on) needs to be sufficiently small. I checked this using a power supply with built-in ammeter; though this is not the most accurate measurement technique, it gives a reasonable indication.

At 241mA, the current draw was acceptable. The hardwiring kit I bought has an inline fuse which appears to be 500mA.

Having fitted the fuse tap, I ran the mini USB cable down and out through the driver’s footwell. The cable was then tucked behind the door seal, up along the right-hand side of the windscreen and behind the headliner across to the rear-view mirror.

This step took the most time, as I researched where the camera should be mounted. UK regulations state any equipment mounted must not protrude more than 4cm into the area swept by the windscreen wipers, or 1cm into the 29cm wide strip within this area centred on the steering wheel.  The camera needs to have its lens within the swept area, however, as otherwise when it rains the view of the road will be obscured – rendering the camera useless.

The ideal location would be behind the rear-view mirror, as no visibility is lost and the best view of the road ahead is obtained. Unfortunately the clearance behind the mirror in the Polo is not sufficient for the Lanka camera and its mount, but I was able to minimise the loss in visibility. The local police’s Road Policing Unit were really helpful and able to give some advice too, as to whether to put the camera alongside the rear-view mirror, or below, though with the caveat that this is not ideal.

@milonoblet I’d lateral as rear view mirror is fitted on verticals axis. The law re sweep of the window is mainly aimed at people cluttering the windscreen with phone / sat nav etc

This site uses Akismet to reduce spam. Learn how your comment data is processed.